Andrew Luck is retired, but all is not lost in Indianapolis 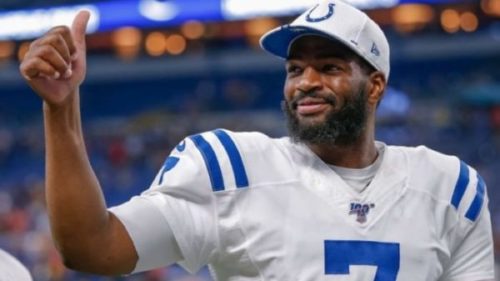 In what might be the most stunning sports news in recent history, Andrew Luck has retired from the NFL at the young age of 29. The collective injuries from his seven-year career have piled up as his passion for the game has dwindled. Jacoby Brissett now takes over as the starting QB of the Indianapolis Colts, a task that he took on in 2017 while Luck was dealing with one of his many injuries. Brissett had a brutal year, winning just four of his 15 starts while throwing for 3,098 yards, 13 touchdowns, and 7 interceptions. Many are predicting a similar down-year for the Colts, as their win total on FanDuel Sportsbook has dropped to 7.0 since the unlucky news broke. However, the advanced stats and metrics indicate that drafters should still target Indianapolis Colts in fantasy football.

For starters, Brissett was acquired from the New England Patriots a week before the 2017 NFL season kicked off. He was forced to learn an entirely new playbook and take over as the starter for the Chuck Pagano-led Colts. The uninspiring playbook was also devised by Rob Chudzinski, who is now out of the league.

Despite overcoming those difficulties and winning the job from Scott Tolzien in Week 2, Brissett was not given much to work with on the field. His Supporting Cast Efficiency ranked No. 32 among QBs that season, as the collective offense struggled to produce any fantasy points. Brissett was also running for his life for much of the season. The Colts offensive line offered an 87.3 percent Protection Rate, which ranked No. 25 in the NFL, and gave up an NFL-leading 52 sacks. His pass-catchers also recorded the sixth-most drops, offering him no help even when he was able to get the ball off.

This should be entirely different in 2019. The Colts cleaned house last year, firing Chudzinski and Pagano in favor of the analytics-savvy Frank Reich. Not only did Reich win a Super Bowl in 2017 as the Offensive Coordinator of the Philadelphia Eagles, but he also boosted Luck to his best Passer Rating/QBR season in 2018.

Colts GM Chris Ballard also invested heavily in the offensive line in the 2018 offseason. First-round pick Quentin Nelson led the charge, as he was an All-Pro guard in his rookie season last year. The unit as a whole performed exceptionally well, posting a No. 4-ranked Protection Rate for Luck in 2018. All five starting offensive linemen return for 2019, meaning Brissett will operate behind the same elite line that his predecessor enjoyed.

Luck’s Supporting Cast Efficiency also ranked No. 13 last year. In addition to returning T.Y. Hilton, Eric Ebron, Jack Doyle, and Marlon Mack, the team added Devin Funchess and Parris Campbell. Brissett will have a treasure trove of dynamic weapons at his disposal to pair with his offensive line this season.

Another benefit of Luck missing nearly all practice in recent weeks is that Brissett has been receiving a full complement of first-team reps. He has been the one developing chemistry within the offense, meaning he is in a far better spot than his 2017 season. This should make him more comfortable and aggressive in 2019. His 2017 season featured plenty of check downs, as Doyle was his favorite weapon. This led to a career year for the tight end, as he finished second at his position in target share and receptions, but it limited the upside of the receivers.

As a result, Hilton posted his worst season since his rookie year. This can be attributed to a lack of rapport, as Hilton’s Catchable Target Rate was just 67 percent, No. 90 among receivers. Extra practice time together and better, innovative play-calling should allow these two to improve their connection on the field. The volume was still there for Hilton in 2017, as he saw a 23.1 percent target share with Brissett. That was actually higher than what he saw last season with Luck at the helm, meaning Hilton should be able to beat the 11.0 fantasy points per game that he put up in 2017 with improved efficiency.

The good news is that we’ve seen plenty of signals that indicate Mack can be a bell-cow for this team. Despite limited receiving production last year, he entered the league with an impressive resume at USF, posting a 10.9 percent (78th-percentile) College Target Share. The team also neglected the position in the draft and didn’t sign any real threats to his workload, so Mack could easily exceed his falling expectations in 2019.

The collective ADPs of Colts skill players are dropping significantly. Fantasy gamers should pounce at the opportunity and enjoy the discounts leading up to the season. Once Brissett and the Colts begin to exceed expectations at the start of the season, their values will receive a nice boost. Be aggressive and take advantage of the fear of drafters.