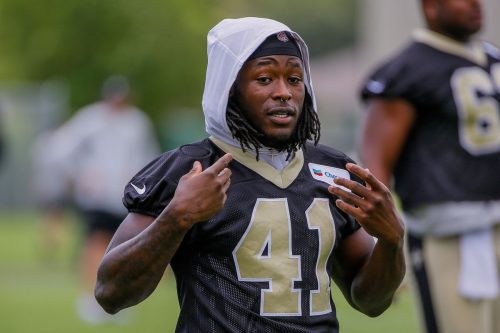 Over the last two years, I have spent a tremendous amount of time becoming more immersed with the advanced stats, metrics and analytics that form the beautiful game we know as fantasy football. Through this, I have grown to notice the underwhelming attention that has, or in this case, has not been paid to the running back position. As I became more curious about the position, I decided to tackle a stat that has become largely discredited in the fantasy football community. Enter, True Yards Per Carry.

The whole idea for True Yards Per Carry, formed late in 2017, when Twitter threads and commentary were bashing yards per carry (YPC), saying it isn’t a true representation of what a running back can do. “Yards per carry doesn’t mean anything” was a line read all too often. To find a measure that would more accurately reflect a running back’s performance, I formulated True YPC to portray what a running back does on the majority of his carries.

The age-old statistic of yards per carry simply divides total rushing yards by the total number of carries. With this, even a few long runs can skew the numbers.  True YPC helps take these into consideration by first filtering out long runs which, for this analysis, will include any of 15 yards or more.  In 2017,  there were 11,675 running back carries and 441 of them (4-percent) went for 15 or more yards.

Step one in defining True YPC was to eliminate “long run” yards from an RB’s season totals.

Step two was to eliminate every carry a running back received inside their opponent’s five yard line and the yards gained or lost on those carries. This adjustment was due to the their likelihood of resulting in little to no gain.  While this adjustment may have only affected a marginal change in True YPC, the goal was to cut out the rewards of long runs while also eliminating short-yardage goal-line carries.

This process highlighted several players whose True YPC was lower than their perceived YPC, but it may give a more accurate representation of what a player actually did on 90-percent or more of his carries. Last season, for example, LeSean McCoy had 287 carries for 1,187 yards and an average of 4.0 yards per carry. He took 16 of those carries for 15 or more yards, totaling 411 yards on those 16. We know McCoy is explosive, but those 16 carries accounted for only six percent of his season’s total. He also took 12 carries at or inside the opponent’s five yard line for a total of 4 yards. When you remove those outliers, McCoy’s True YPC appears as shown:

The 2.8  to the far right is McCoy’s True YPC, and the -1.2 is the difference between standard yards per carry and True YPC.

What Does True YPC Tell Us?

The biggest takeaway from the the True YPC process is differentiating between running backs who showed a strong True YPC versus those whose YPC numbers may have been skewed by a few long runs. It should come as no surprise that Alvin Kamara came in as one of the most effective running backs in True YPC, posting an amazing 4.1 True YPC score. Kamara was the only running back in 2017 to exceed 4.0.

As a new metric to measure running back effectiveness, True YPC helps address the flaws in standard YPC by eliminating outlier runs. It can also help spot running backs more likely to break off a big run. While we know what to expect from traditional upper-tier backs, when looking to deploy a Zero RB strategy, finding players who possess big play potential later in drafts could bode well for a team’s ceiling.