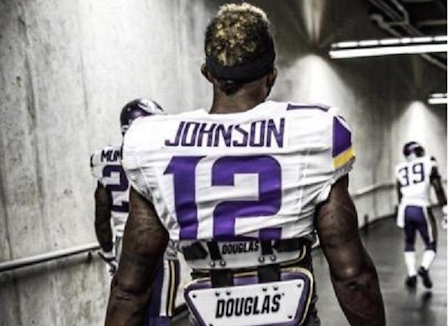 Confession: I love outliers. Always have, always will.  As a fantasy manager who is always bobbing for that perfect, crispy, value-saturated apple, Charles Johnson falls into the goldilocks zone of my Venn diagram.  If you have little time for details, just remember this: Charles Johnson may appear unconventional, but he’s actually quite conventional.  Though he appears to be a risky selection, he’s actually an optimal mid-round selection.  If you do have the time, let’s take a deeper look at what makes Charles Johnson a savvy, possibly league-winning selection (if you can’t digest this heaping helping of Charles Johnson info, have a read of RotoViz’s Jon Moore espousing on Johnson in 2013).

EXHIBIT A: NFL TEAMS ARE NOT THE BRIGHTEST COLORED CRAYONS

Flashback to April 25 – 27, 2013. 32 organizations have been preparing this weekend for well over a year. Thousands of man-hours and tens of millions dollars are invested in screening the best amateur football players. Surely the polished, experienced, giant-brained player personnel staffs of the NFL are ready to Carpe the Diem out of draft weekend… oh, wait.

TAKEN 208 PICKS AHEAD OF CHARLES JOHNSON These are just prominent examples of what is shaping up to be a smoldering crater of a WR draft class. It would be understandable if only three WRs were selected ahead of Charles Johnson in a weak WR class, but 23 (!!!) WRs heard their names called before him.

How a rational NFL team could overlook Charles Johnson‘s 48.9-percent Collegiate Dominator Rating (94th-percentile), and his 117.7 SPARQ-x score (86th-percentile) befuddles even the most ardent metrics skeptics. It seems that nothing short of a 30-foot neon sign reading “TALENTED WR HERE” would have inspired NFL general managers.  The fact that Charles Johnson slipped to the 7th round of the NFL Draft proves that every front office’s WR evaluation process is fundamentally flawed.

EXHIBIT B: RIGHT PLAYER, WRONG ROUND.

There exists research by credible individuals that suggests that draft round selected is a helpful tool in predicting future performance. Early-round draft capital propels players into the starting lineup early in their careers, creating a straightforward success trajectory.  Conversely, the later-round players, particularly those from non-BCS programs, must overcome the gravitational pull of their late-round, small school player reputation by taking a more circuitous route to stardom. This archetype is personified by Victor Cruz and Charles Johnson; the metaphorical 1st-round wolf in 7th-round sheep’s clothing.  Criminally under-drafted small school wide receivers like Cruz and Johnson offer the best possible value proposition: deep sleepers with WR1 ceilings (also known as fantasy football nirvana).

Unadjusted for inflation, only Aaron Mellette posted a higher collegiate dominator rating than Charles Johnson’s (adjusted for inflation, Johnson was bested only by Mellette, Keenan Allen, and Stedman Bailey). I could’ve understood if Mr. Johnson was some relatively unathletic schlub destined for a life of dominating company flag-football leagues, but Johnson’s 112.2 Height-adjusted Speed Score (HaSS) was 92nd -percentile and his 133.7 Burst Score on PlayerProfiler.com was 94th-percentile).  While the planet theory was designed to identify defensive and offensive linemen, it can be applied here with WRs.

Perhaps NFL front offices put too much on the fact that Johnson was a late bloomer (his 22.5 Breakout Age was 6th-percentile among NFL WRs), and let him slip much too far.  However, if NFL teams had done their due-diligence on Johnson, they would have wisely looked past his delayed breakout.  Johnson was one of the few WRs in the 2013 draft, or any draft for that matter, with enough size to break the jam as a split end, and the speed to torch as a flanker.

The fact that Johnson broke out at all is a testament to his unique athletic genius, resilience, and ability to learn quickly. Originally a shortstop/pitcher, Johnson decided to give football a go his junior year of HS, and quickly attracted scholarship offers. Johnson committed to Louisville but backed out when the prospect of greyshirting was put on the table, and decided instead to attend Eastern Kentucky. His stay there was short, murky, and unceremonious, catching three passes for 63 yards his freshman year and being suspended for two years for having a stolen laptop in his room. Johnson denies it was he who stole the laptop, and due to his roommate’s expulsion with no possibility of return, he might have been punished for not cooperating.

With his football future thrown into limbo, Johnson toiled away at Antelope Valley Community College for a season, posting a 24-231-3 line in nine games.  After the season, Johnson received a phone call from his father informing him that he “had a head cold.” His condition was actually far more serious, and Johnson flew home to Kentucky to keep his father company during treatments for multiple forms of cancer.  Johnson considers this event to be the turning point in his football career.

After Google-searching “Top D2 Programs”, Johnson found his way to Grand Valley State.  In only his fourth year of organized football, Johnson began toasting DBs on the regular. He completed  56-1030-15 and 72-1199-16 seasons and racked up a sensational 49.8-percent College Dominator Rating his senior season. Disregard Johnson’s old-age breakout: in football years, he is young because he took up the game late.  For every rule, there are exceptions, and Charles Johnson is a 6-2, 215-pound SPARQtacular fireworks show.  It also doesn’t hurt that while the road ahead looks foreboding, plenty have crossed it, and he has a developing facilitator of fantasy goodness at quarterback.

In the age of quickly-developing receivers, a player like Johnson is viewed as an outlier. While Charles Johnson may be perceived as a unicorn in the present-day, he’s actually just continuing the trend of small-school WRs with a differing development curve.

(NOTE: I was not able to find 40 time’s for Joe Horn, John Taylor, and Rod Smith, therefore 4.5 was used as a placeholder. Those players very well could’ve been far faster than that, but measurements have been lost to the sands of time. Bill Schroeder was quoted as saying he ran a “4.26” at the combine but was adjusted to 4.4 due to inability to verify from credible sources.)

As you can see above, Charles Johnson fits the archetype of the “unicorns” of the 80’s and 90’s. These players showed productivity at a lower level, and above-average athleticism (despite his low Est HaSS, Donald Driver was a world-class track athlete, and his SPARQ-x would’ve been off the charts).

Charles Johnson put up his sensational senior numbers with three different quarterbacks. In the NFL, however, a receiver needs a capable QB providing the quality volume necessary for fantasy success. All the aforementioned WRs, except for Joe Horn, also had a pro-bowl QB throwing passes their way during the years in which they were most productive.  Judging by his rookie season, Teddy Bridgewater is well on his way to a productive career.

On the chart above, seven of the nine QBs listed have been to at least one Pro Bowl. It’s not the greatest measure of quarterbacking success, but to be perceived as a leader in one’s field is something that should be held as a decent benchmark of success.

Teddy Bridgewater is the rare quarterback whose comparison to Aaron Rodgers is actually fair and balanced analysis. Bridgwater’s tremendous breakout age, QBR, and collegiate YPA suggests a rapid ascension to greatness is within his range of outcomes.  At worst, he should develop into the best passer of 2014 class, and one that can support two fantasy-relevant WRs.

What About His ACL?

Oops, I forgot to mention that 2015 is going to be Charles Johnson’s 2nd year after ACL surgery. While evidence of impact on WRs is unclear due to opportunity/pre-injury talent level differences, a marked 2nd-year performance increase exists in running backs after an ACL injury. It’s anecdotal, but this increase in productivity in year two can be attributed to a player regaining confidence in his athletic abilities after such a traumatic injury.  Johnson certainly appears to be comfortable at this point, but it is not unreasonable to believe that he will be even more confident and explosive next season.

• In terms of WR drafting, the NFL should not be looked at as an intellectual authority. All 32 teams ignored readily available predictive data showing Charles Johnson was one of the most talented receivers in an otherwise weak 2013 draft class.  You should cast aside any qualms about his 7th round draft slot; he should’ve been gone long before then.

• Despite his low breakout age, Johnson is relatively new to the game, and if you believe in the touchy-feely human side of things, he has tremendous motivation to improve.

• Charles Johnson may appear unconventional, but he fits the mold of a dominant, athletic, Division 2 or lower class of WR that was constantly undervalued during the 90’s.  With an MFL ADP of 77th overall, his value is un-ignorable.

• His quarterback Teddy Bridgewater had a historically good rookie season. His PlayerProfiler metrics and his rookie statistics foreshadow a bright future with plenty of accurate targets for Johnson.

• He’s going to be two years removed from major ACL surgery, and in the same offense for consecutive years for the first time as a professional.

Brian Tesch could not foresee conference realignment as a young boy, and now appears as if he is the world’s biggest bandwagon fan. Rest assured, he still hates John Elway. Brian Tesch has written for FFlockerroom.com, FantasyPros.com, was once trucked by Jonathan Stewart, and has finished a large pizza in under an hour. If you found this work interesting, please feel free to leave a dollar or twelve in the jar, as he’s saving up to be certified as a scout. You can also follow him on Twitter dot com @TheRealTesch.