The Chicago Bears are in the midst of a retooling following an up and down year in 2020. They finished with an 8-8 record, and came into the offseason looking to upgrade at multiple spots. One of the few positions in which they excelled in 2020 was at running back. David Montgomery was a fantasy hero, ending the year with a 17.5 (No. 6 among qualified running backs) Fantasy Points Per Game average. However, the team around him has changed considerably, especially in the backfield. PlayerProfiler’s advanced stats and metrics illuminate the reasons fantasy gamers need to proceed with caution.

David Montgomery burst onto the scene in his second professional season, logging a career-high 1,070 (No. 5) rushing yards and scoring 10 (No. 10) total touchdowns. He had a 76.2-percent (No. 4) Snap Share, and ended up finishing as the RB6 in PPR leagues last year (RB4 if you include Week 17). People will most likely remember his season-ending eight-game stretch in which he registered 151 carries for 717 yards and seven rushing touchdowns. He paired that with 29 receptions for 254 yards and a receiving touchdown. That hot finish had fantasy owners going crazy for the kind of season he could have in 2021. 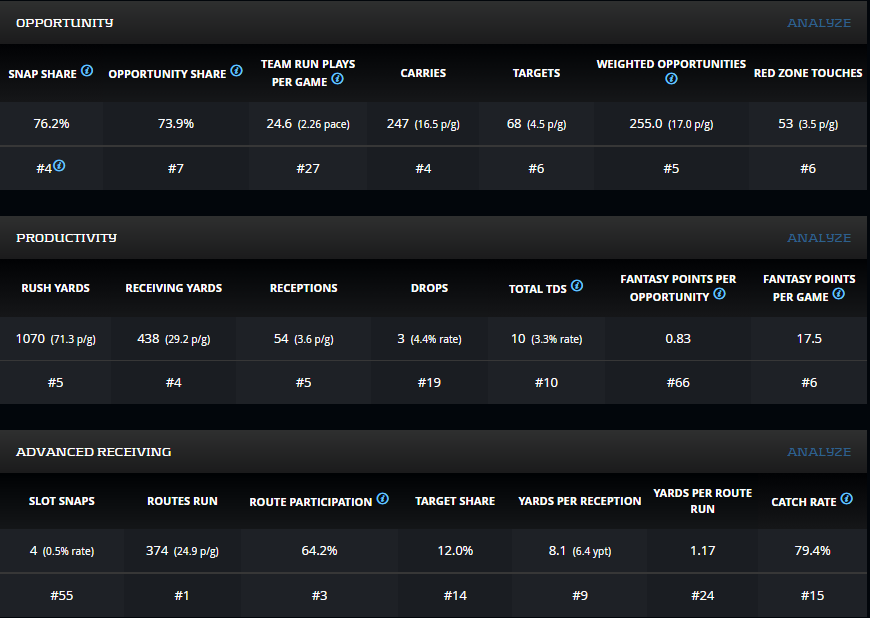 Montgomery’s advanced receiving metrics immediately jump off the page, and are the biggest driving factor behind his RB1 fantasy finish. The return of Tarik Cohen from a season-ending torn ACL will cap Montgomery’s receiving upside, and he won’t come close to last year’s 68 (No. 6) targets. Especially considering Cohen drew 104 (No. 3) targets in 2019. His 64.2-percent (No. 3) Route Participation mark and 374 (No. 1) routes run will also take a major hit. Let’s also not forget the Bears averaged 24.6 (No. 27) Team Run Plays Per Game. That came from throwing from behind a ton with Mitchell Trubisky routinely tanking games. Even average quarterback play from Andy Dalton and Justin Fields should allow for more opportunities, and that is where Damien Williams comes in.

There’s a New Kid In Town

Losing Tarik Cohen for the season in Week 3 illuminated how little depth the Bears had behind David Mongtomery. So they made a move this offseason to sign Super Bowl LIV hero Damian Williams, formerly of the Kansas City Chiefs. Williams has 1,231 yards rushing and 12 touchdowns so far in his career spanning Miami and Kansas City. He’s also chipped in 1,106 yards through the air and added 10 TD receptions. His addition raises questions about what can be expected from Montgomery going forward. While he should return to his role as the primary ball carrier, he should also be able to stay fresh for a full 17-game season with a capable back like Williams there to shoulder more of the workload. The should-be-former-Super-Bowl-MVP also has true three-down skills; his receiving chops are nothing to take lightly.

The additions of Justin Fields at quarterback and Williams in the backfield, along with Cohen’s return, will force Montgomery to be more efficient with his workload no matter how you run the game simulations. His -2.7 (No. 42) Production Premium will not get him far with the volume he is sure to receive.

Williams has fresh, well-rested legs after opting out of the 2020 season. The last we saw of him was when he ran for 104 yards in the Super Bowl, including that 38-yard TD run that iced the game. His abilities as both a runner and receiver made him a strong fit in the Chiefs offense, and we can expect him to keep up that same fit in Chicago.

With one RB1 fantasy finish in Fantasy Points Per Game already under his belt, David Mongtomery is well on the way to being worth the cost it took to acquire him in 2019 rookie drafts. But unless he can prove that it doesn’t just take heavy volume for him to produce, Tarik Cohen and Damien Williams will ensure that he fails to repeat his RB1 finish from a season ago.