Alvin Kamara: The Elusive Enigma of the 2017 NFL Draft 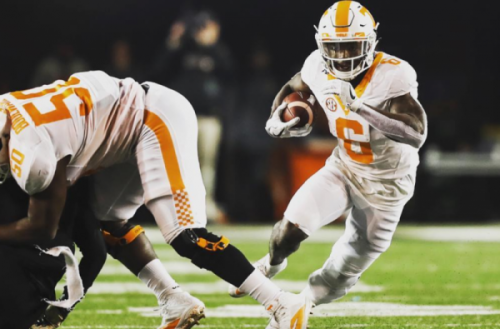 A highly sought after four-star recruit coming out of high school, Alvin Kamara, originally attended a little old school named Alabama. After failing to see game action and running into some off the field issues, Kamara transferred to Tennessee. While at Tennessee, Kamara showed flashes of production although he was never able to record over 1000 all-purpose yards. Tennessee deployed Kamara as a secondary backfield option, and Kamara will likely be a talented 3rd down back as he translates to the NFL.

In 2016, Kamara was No. 15 in the country in receiving yardage among running backs yet only No. 97 in Total Yards from Scrimmage. When Jalen Hurd left the Tennessee program midway through the 2016 season, Kamara received a more consistent opportunity share. In times that Tennessee volunteered Kamara, he recorded 5.8 Yards Per Carry (60th-percentile).

The one aspect that jumps off the page on Kamara’s mostly average athletic profile is his explosiveness. In this respect, Kamara is truly elite, laying claim to a 132.7 Burst Score (94th-percentile) per PlayerProfiler. When looking at comparable NFL players, the player Kamara brings to mind is Charcandrick West, although, Kamara holds a greater proclivity for elusiveness than West. This evasive quality may allow Kamara to perform at an efficiency level, which his workout metrics do not currently suggest (think Devonta Freeman). Kamara should provide fringe fantasy relevancy, and though the long-term upside is impressive, it is also improbable.