As you gorge your seven-course meal and contemplate the meaning of existence this Thankgiving, please take solace in Thursday’s slate of games and the following sneaky GPP plays on DraftKings.

Over the entire season, Thielen has averaged 7.2 air yards per target, which is higher than Mike Evans’ 6.7 air yards/target and A.J. Green’s 7.0 air yards/target. Thielen makes for an enticing GPP play on the Thursday slate on Draftkings at $4000, regardless if Diggs is active or not: If Diggs is announced active, he will likely be limited and Thielen’s ownership kept in check. If Diggs is not active, Thielen’s ownership bump will make him a less enticing, but still good GPP play, and he would be become a strong cash game play due to the more certain increase in targets.

In a slate where most will pay up for Kirk Cousins ($5900), Dak Prescott ($6300), or Ben Roethlisberger ($7300), I like Matthew Stafford as contrarian salary relief in GPPs at $5700. Chris Raybon’s phenomenal offseason DFS strategy piece for quarterbacks highlighted two major characteristics that large-field GPP winning quarterbacks usually share:

1) Contrarian plays. In 2015, the median ownership percentage of a QB in the Draftkings Millionaire Maker winning lineup was 6.9-percent. 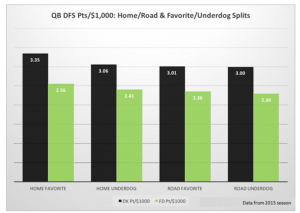 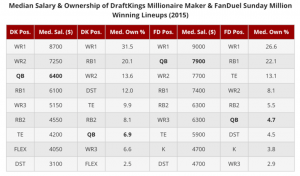 Matthew Stafford is the only quarterback of the four mentioned above that checks both boxes for this Thanksgiving slate. While other playable quarterbacks on this slate are experiencing plateauing or increasing price points, Stafford presents an opportunity to play a high-ceiling quarterback (three games of 28+ DK points this season) at an historically low price. Besides a brutal matchup on the road against this same Vikings defense in Week 9, Stafford’s DraftKings price has not been this low since December of last year when he was $5800 against the Rams.

The current version of Matthew Stafford under Jim Bob Cooter is one of lower pass volume and higher efficiency, as he is currently ranked No. 5 in completion percentage and No. 5 in redzone completion percentage, yet No. 17 in total pass attempts and No. 20 in red zone pass attempts. In a game that is projected, per RotoGrinders, to be the 10th highest paced game out of 16 games for Week 12 (and the highest of the Thursday slate), and where the Lions are projected to see a slight bump in plays run versus their average (+2.1), Stafford owners will be hoping his passing volume catches up with his impressive efficiency.

We at PlayerProfiler badly want DeSean Jackson to be a thing again. His target share this season (17.8-percent) is currently higher than it was last season (16.8-percent), so what is the damn issue? Well, for one, he is averaging 5.6 air yards/target this season, which is a strong dropoff from last season’s 7.6 yards/target and presumably his career average. Surely, his season-long knee, ankle, and most recently, shoulder issues can’t help his cause. However, Jackson looked to be near full strength last week against the Packers, posting 4 catches on 6 targets for 51 yards and a touchdown, and is ready to roll this Thursday against an average Cowboys secondary that ranks, per Football Outsiders, No. 25 in pass DVOA and No. 16 in DVOA vs. WR1s.

In a game where the Redskins will most likely be playing from behind and throwing early and often, all members of their thriving receiving core will be playable options. While Jamison Crowder ($5,800) and Pierre Garcon ($3,900) are the “safer” points per dollar options, Jackson provides a combination of big play ability and low ownership that provides intriguing leverage in GPPs. We won’t quit you yet DeSean.