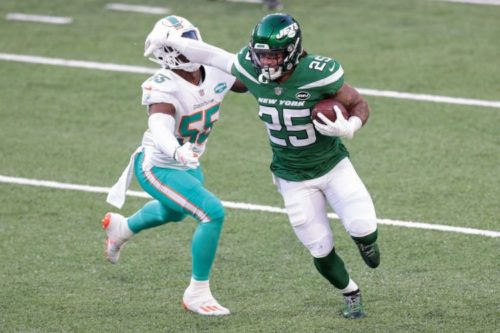 Congratulations to those who have found their way to this article and to their fantasy playoffs. PlayerProfiler’s advanced stats and metrics help millions of users track the most proficient waiver adds and weekly starts in the game. Now it is time to hunker down with a championship on your mind.

Ty Johnson is the priority add going into Wild Card week given his expected workhorse role and soft matchup against Seattle. Frank Gore went down with an injury, and to nobody’s surprise, a running back younger than 30 looked more explosive and played more efficiently.

Gore will likely miss Week 14 due to a concussion, paving the way for another 20-plus touch week for Johnson. There is concern that Seattle rebounds this week and blows out the Jets, but regardless of Game Script, Johnson will get plenty of touches due to Adam Gase’s archaic play calling.

Keke Coutee emerged for a monster performance with 8 catches and 141 yards on 9 targets against the Colts. His increased usage will continue given that he is the secondary option in a high-octane passing game for a Texans offense that continues to project for negative Game Script.

A Week 14 matchup against Chicago limits Coutee’s touchdown upside, but he still belongs in the Flex spot if you are thin on options. A Week 15 rematch against the Colts and Week 16 Tank Bowl against the Bengals provide some much needed upside to finish off the season.

Tim Patrick has been heavily fueled by touchdown production, which is unpredictable and risky for your Flex spot. With that said, he remains a featured weapon for Drew Lock, who continues to fling the ball downfield on a regular basis.

Patrick’s playoff schedule is soft enough for consistent production with Carolina, Buffalo, and the Chargers on deck. He played 90-percent of the snaps in Week 13 and continues to post over 10 yards per catch most weeks. He is the definition of a high-upside, but high-risk Flex play. When contending for a title, you want to lean upside.

Peyton Barber is in competition with Jordan Howard for least exciting fantasy producer over the last three years. He is the poster child for doing the least with the most. However, he once again finds himself staring down the barrel of 15-plus early down touches with Antonio Brown likely missing the next few weeks. Barber can be started as a desperation, touchdown-dependent Flex play. Remember, the Football Team is competing for a playoffs, and the upcoming schedule (SF, SEA, CAR) can enable some short-yardage touchdown upside for an otherwise lackluster starter.

Gabriel Davis and Tim Patrick are in similar spots with featured roles, but recent touchdown-dependent production. Davis has proven all season to be reliable when given an opportunity in John Brown‘s absence. Brown is down once again, and Buffalo is competing for their division with Miami one game behind and the Patriots holding onto hope.

The Steelers are a tough matchup on paper, but Josh Allen will still make big plays and Davis can find himself on the receiving end of those plays when you need it most for your fantasy lineups.