Having already covered the top five risers in fantasy football for the 2017 season following the NFL draft, it’s time now to focus on the biggest fallers.

As dreams were being realized by NFL rookies, several league veterans have seen their stock plummet due to the incoming talent. Below is a list of players you should consider avoiding when looking for immediate success in the 2017 fantasy football season.

Was Mike Glennon ever a favored fantasy football option in the first place? Maybe not. If you were considering him before, you most certainly aren’t now following the Bears (foolishly) trading up to the second overall pick to select North Carolina quarterback Mitchell Trubisky, seemingly putting an end to the Glennon era in Chicago before it ever really started.

Nevermind the anemic athleticism: 4.94 40-yard dash (31st-percentile) and 77.7 SPARQ-x score (12th-percentile), Mike Glennon possesses one of the weakest arms of any quarterback in the league, being clocked at a 49-MPH Throw Velocity (3rd-percentile), and has been a project quarterback since entering the league in 2013. 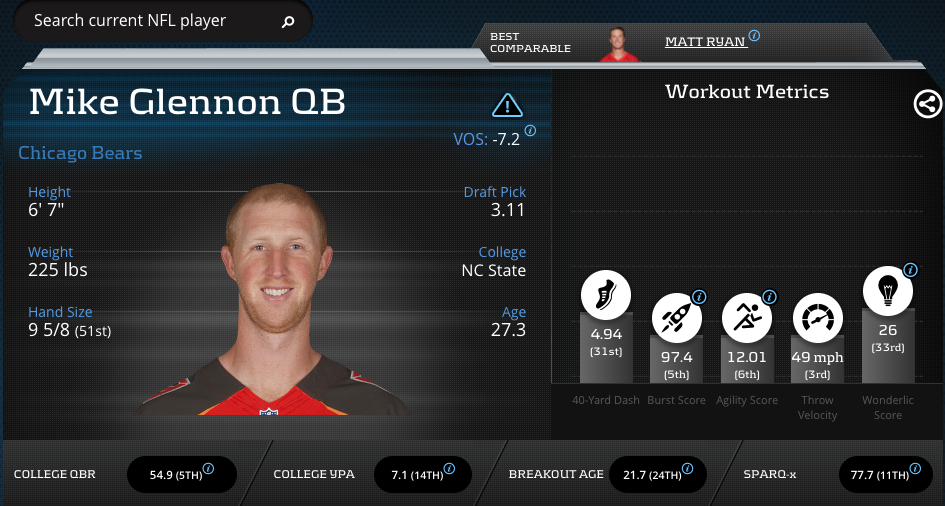 His time appeared to be coming in 2015 until the Tampa Bay Buccaneers drafted Jameis Winston with the first overall pick in the 2015 NFL Draft, and now Glennon will again look at a limited starting role in 2017 thanks to the selection of Mitchell Trubisky.

While Mike Glennon could start most/all of the season this year for the Bears, he will unquestionably be phased out no later than the start of 2018, and comes into this season with an underwhelming wide receiver corps. Even if he is slated for a full 16 games in 2017, you can stay away from Glennon, who is unlikely to post fantasy relevant numbers.

The Minnesota Vikings drafted running back Dalvin Cook with the 41st overall pick in 2017, and will now share a backfield with Jerick McKinnon and Latavius Murray. A committee has already been discussed just weeks into mini-camp, giving plenty of cause for concern to fantasy gamers looking to bolster their backfield with a Minnesota running back.

The biggest faller of this backfield may be Jerick McKinnon, who for now, appears to be on the way to a limited role in Minnesota despite his elite athleticism and playmaking ability. McKinnon ranks as one of the most athletic backs in the league with a 4.41 40-yard dash (95th-percentile), 110.5 Speed Score (90th-percentile), 134.9 Burst Score (97th-percentile) and 10.95 Agility Score (92nd-percentile).

With the signing of Latavius Murray this offseason and drafting of Dalvin Cook, something in Minnesota seems to be indicating a lack of belief in Jerick McKinnon.

If the overcrowded backfield isn’t enough reason to stay away from Minnesota running backs, consider that the Vikings had the worst run blocking line in 2016, coming in at a 62.9 run block score on PlayerProfiler.com (no. 32 overall). A lackluster offensive line and split carries are all you need to know about Minnesota’s backfield. Even the New England Patriots and their 50-plus running backs look more attractive than the three candidates coming out of the Twin Cities.

While Dalvin Cook landed in a less than ideal spot with the Vikings, running back Joe Mixon landed in one of the more ideal spots, and simultaneously relegated the injured Giovani Bernard, and underwhelming Jeremy Hill to backup roles. Hill possess a downhill style of running, and Giovani Bernard has the knack for hauling in one pass after another, but Mixon has the ability to do both.

Viewed as an easy first round talent, character issues caused Joe Mixon to drop to the second round, being selected 48th overall by the Bengals, who have shown in years past they have no problem picking up players with character concerns. Mixon comes in with a 4.50 40-yard dash (75th-percentile), 111.2 Speed Score (91st-percentile) and 120.4 SPARQ-x Score (73rd-percentile). His college YPC comes in at a blistering 6.8 YPC (91st-percentile), and he also dominated his college target shares with 11.7-percent (81st-percentile).

Already a favorite in dynasty rookie drives, Joe Mixon could propel up all fantasy draft boards in 2017 as the offseason progresses and he carves out a role in Cincinnati as a three-down back. All arrows are now pointing up for Mixon, while his fallen teammates will look to scrounge touches in complementary roles.

Washington selected the other Oklahoma running back in the NFL draft, Samaje Perine, with the 114th overall pick in the fourth round, and the sluggish, less athletic running back, Rob Kelley could be without a significant role in 2017.

Samaje Perine boasts a 127.5 SPARQ-x score (88th-percentile), and had one of the best bench presses at the NFL Combine, putting up 30 reps (98th-percentile), while also bringing in a 6.0 college YPC (69th-overall).

Running back Chris Thompson is already slated to revive his role as the third-down, pass catching back, leaving Samaje Perine and Rob Kelley left to grind out the early down work. If the backfield belongs to Kelley and Thompson early in the season, it will only be a matter of time before Perine peeks his head into the workload, before eventually overtaking all early down touches.

Washington ranked fourth in the league in run blocking in 2017 on PlayerProfiler.com, notching a 132.4 run block score, making either of these starting candidates an attractive option once their roles are determined. That being said, Rob Kelley appears to be the odd man out sooner or later.

The 2016 preseason all-star Tajae Sharpe and established veteran Rishard Matthews both appear to be in line for a loss of opportunity due to the selection of not one, but two wide receivers by the Tennessee Titans in the first three rounds.

The Titans selected Western Michigan stud Corey Davis fifth overall in this year’s draft, and came back in the third round to draft Taywan Taylor with the 72nd overall pick. While Taylor could take a little more time to see the field, there’s no doubt the Titan’s intent for Davis in 2017, who should takeover as the top receiver by Week 1, if not sooner. 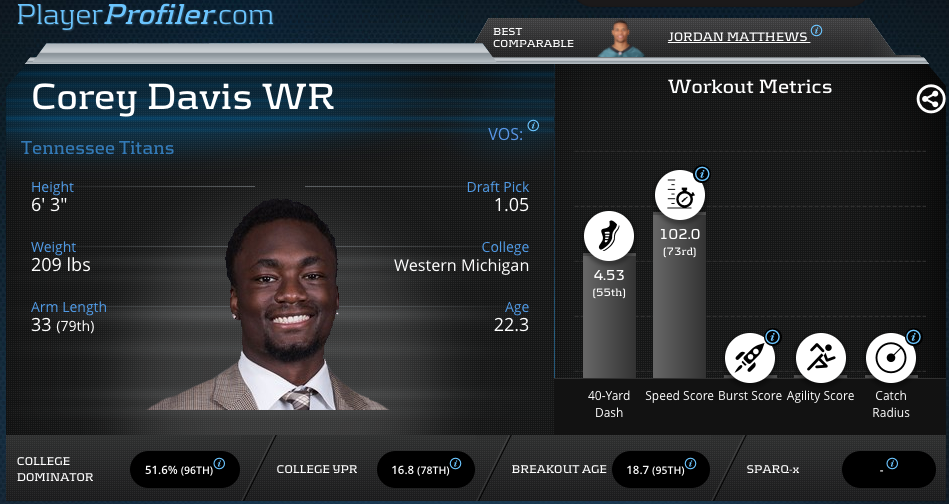