If Michael Pittman‘s name sounds familiar, it’s because his father played running back for the Cardinals, Buccaneers, and Broncos over an 11 year NFL career. Pittman Jr. was a dominant receiver at Oaks Christian High School in California, where he earned USA Today All-California Offensive Player of the Year after posting an incredible senior season. He capped off the year with a 16-catch, 354-yard, five-touchdown performance in his final game. In his freshman year at USC, he played in all 13 games as a reserve, accumulating six receptions for 82 yards with four kickoff returns and several special teams tackles. He battled an ankle sprain early in his sophomore season, but still earned first-team All-Pac-12 honors for his accomplishments on special teams. He also started six games on offense, totaling 404 yards and two touchdowns on 23 receptions. 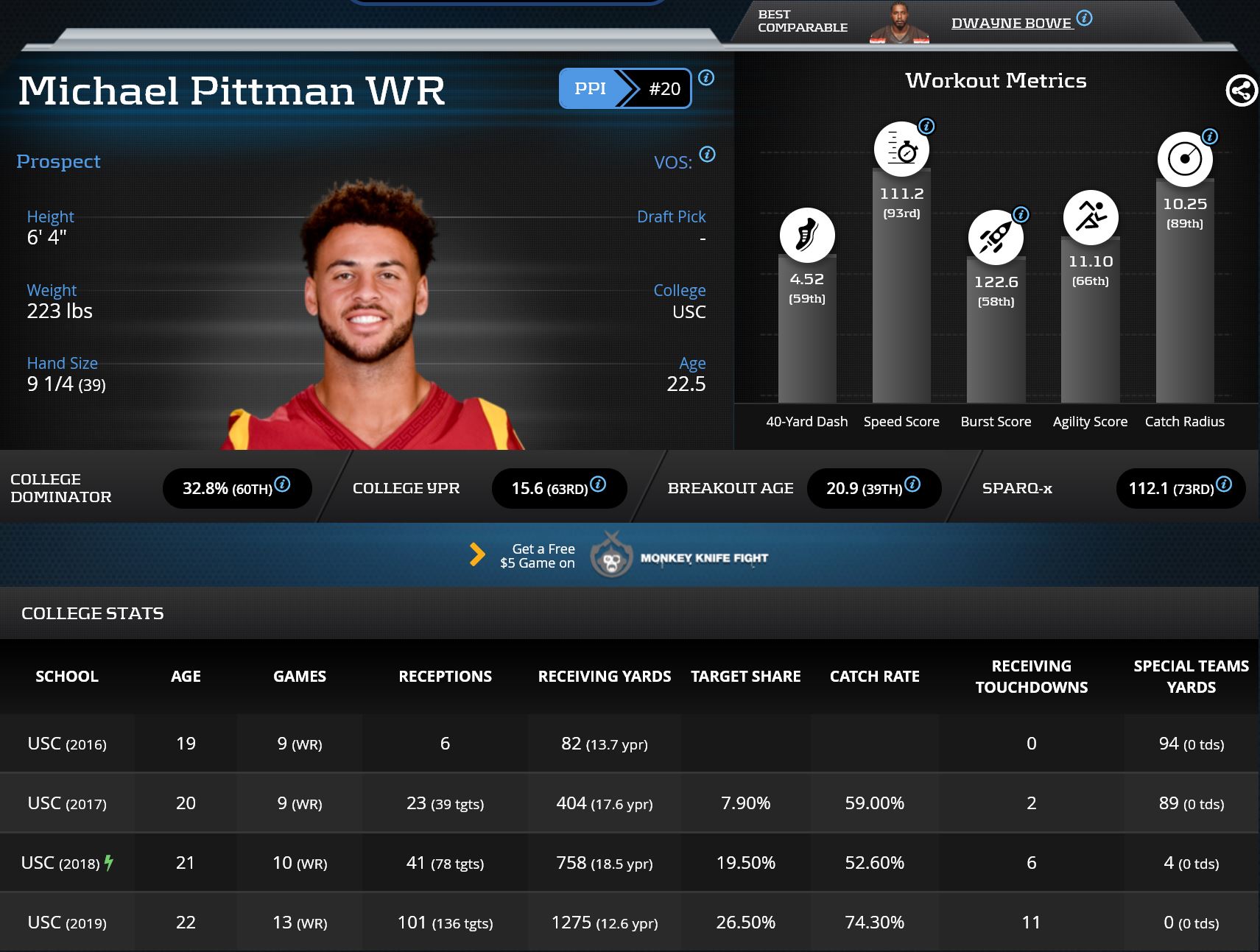 Pittman’s ascension up the depth chart continued in 2018 when he caught 41-of-77 targets for 758 yards (18.5 YPR) and six touchdowns. He was named honorable mention all-conference in what was technically his breakout season while recording a 29.35-percent Dominator Rating. After the season, he underwent shoulder surgery for an injury that forced him to miss two games. In what felt like more of a true breakout campaign in 2019, Pittman was among the nation’s leaders with 101 receptions for 1,275 yards (12.6 YPR) and 11 touchdowns in 13 starts. He finished the year with a 31.43-percent share of his team’s passing touchdowns, averaging 2.48 yards per team pass attempt and 2.32 yards per route. He was named a Biletnikoff Award finalist, second-team Associated Press All-American, and first-team All-Pac-12. His 32.8-percent (60th-percentile among qualified wide receivers) College Dominator Rating is more than acceptable.

Pittman was quietly one of the biggest winners at the NFL Combine. After weighing in at 6-4, 223-pounds, he ran a 4.52 (59th-percentile) 40-yard-dash, translating to a 111.2 (93rd-percentile) Speed Score. He performed well in the agility and explosion drills, registering an 11.10 (66th-percentile) Agility Score and a 122.6 (58th-percentile) Burst Score. He’s among the only receivers to have tested in enough drills to register a complete athletic profile. This will make him easier to evaluate for fantasy purposes. His Best Comparable Player is Dwayne Bowe, in a good way, and players who look like this tend to become valuable fantasy assets.

Pittman is in position to be an immediate plug-and-play WR2/WR3 on an NFL depth chart. He has the full route tree in his arsenal and can play both X-receiver or as a big slot. He’s a quarterback-friendly, big-bodied possession receiver with solid contested catch ability and a massive 10.25 (89th-percentile) Catch Radius. He proved he was a dynamic player, with a 26.0-yard career punt return average and one touchdown. There are some big red flags in his production profile, though. His late breakout and lack of a meaningful role in the USC offense until his junior and senior seasons is concerning, as is his lack of production after the catch. He averaged just 4.8 yards post-reception with 20 broken tackles on 171 career receptions. With that said, he’s still a top-10 WR in this class and a solid second-round selection in dynasty rookie drafts.