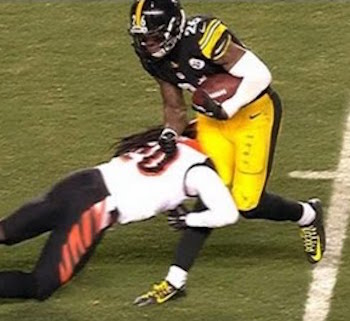 Reporters often use the term “repair” as a generic term when writing about knee surgery, but in this situation a repair is when a surgeon fixes native ligamentous tissue.  A reconstruction is when a surgeon rebuilds a ligament out of another scaffold such as a tendon.  I don’t know the details of Le’Veon Bell’s injury or surgery, but PCL reconstruction is much more common than PCL repair.  MCL repair is usually the standard of care in this scenario.

Le’Veon Bell participated in individual drills at Steelers OTAs and minicamp.  He and the Steelers’ staff have expressed optimism about his progress in rehabilitation.  In April a video was posted of Bell dunking a basketball.

There is a paucity of literature on this topic.  This is because PCLR is much less commonly performed than ACL reconstruction.  Reviewing Le’Veon Bell’s injury is also hard because there are a variety of different MCL repair and PCLR techniques that are commonly used.  A recent survey of NFL team physicians showed significant differences in preferences when performing PCL reconstruction.

In my opinion the best way to look at this data is to review PCLR and MCL repair individually.  A recent review paper looked at 21 studies on isolated PCLR.  It is important to note that a variety of surgical techniques and rehabilitation protocols were used in these studies that could affect results.  I will review graft failure rate, instability, range of motion, subjective outcomes, and functional outcomes.

The pooled graft failure rate was about 12-percent (range 2.3-30-percent).  Only six studies reported the failure rate of isolated PCLR.  Failure was defined as significant knee laxity or if the patient required revision surgery. Failure often occurred because of severe laxity in the knee.  Laxity occurs when the ligament is not adequately holding the bones together and this causes the knee to be unstable.  These studies followed players for about two years after surgery and sometimes for much longer.

Residual instability is common after PCLR, but it is not always severe.  Most of the time the instability is small, but more than a few studies reported moderate instability in about 20-percent of patients.  Instability like this could cause problems for a high level athlete who relies on cutting and change of direction for success on the field, although instability on exam does not always correlate with loss of function.

Small losses in range of motion (ROM) are not uncommon after PCLR, although it is hard to judge the true incidence of this problem because many articles did not report ROM and the articles that did report ROM did not do this in a universal way.  It would be very uncommon for a patient to need a second surgery for loss of motion and news of this would usually have surfaced by now.  I think it is unlikely that loss of motion would be a problem for Le’Veon Bell.

Subjective (how the patient feels) scores are usually good or excellent for activities of daily living, but scores that account for higher level of function such as sports often show results that are less encouraging.  This review paper showed large differences in some of these functional results between studies, and it is hard to know what best applies to Le’Veon Bell without knowing the details of his surgery.

Eight studies reported on pre-injury and post-injury sporting activity levels in the general population and overall there seems to be a decrease in post-operative activity level.  In the isolated PCL studies only 50-82-percent of patients were able to return to pre-injury level of activity.  These scores can be influenced by many factors and are not always a reflection of the health of the knee alone because many patients lower their activity level because of social or financial reasons.

Rehabilitation after PCL injury is usually more conservative than after ACL injury because of the higher risk of residual laxity.  One review article showed that surgeons allow return to play at anywhere from six to twelve months after surgery. This depends on surgeon preference, surgical technique and associated injuries.

The other surgery Le’Veon Bell likely had was MCL repair.  MCL repair is uncommon because this ligament usually heals well without surgery.  The MCL is more commonly repaired when it is injured along with the ACL, PCL or both of these ligaments.  A recent review paper on MCL repair showed a failure rate of 6-percent.  Failure was defined as severe knee laxity.  76-percent of knees were very stable and 90-percent of knees had nearly normal stability.  Most patients also had good subjective outcomes.

At the time of writing this article Le’Veon Bell is the number two overall player in the consensus redraft rankings of 71 experts on one site.  His dynasty ADP has been about eleven from April to June of 2016.

Based on the available literature it would not be uncommon for Le’Veon Bell to experience persistent instability or a decrease in his activity level after a PCL reconstruction.  I think it is less likely that he has problems from a MCL repair, but it is certainly possible.

In February the Steelers GM was noncommittal on Le’Veon Bell’s status for week one although Bell will have about ten months to rehab before the start of the season.  It is hard to predict if he will be ready, but many rehab protocols allow return to play between six to twelve months.  Even if Bell does return to full health his knee could experience early arthritis that could limit the length of his career.

In general I do not like to speculate on a player’s injury or surgery when I have limited details, but I wanted to write something on this topic, because I have seen many experts and fantasy enthusiasts assume that Le’Veon Bell will be back to full health before the season.  I believe Bell’s preseason ranking and ADP are too high for a player coming off an injury with such high rates of instability and loss of function.  Moreover, even if Bell’s knee does well long term he may not be ready for the start of the 2016 season.  Odds are that Bell will come back to full health, but I am not willing to invest such a large amount of draft capital in a player who could have a problem returning to his pre-injury form.  This information applies to both dynasty and redraft formats.

Dr. Sean Fitzsimmons is an orthopedic sports medicine specialist at Lenox Hill Hospital in New York City. He reminds you that the advice he gives is specific to the player he is evaluating and medical information from these articles should not be used to treat personal injuries. Dr. Fitzsimmons has not examined or been involved in the care of the player(s) mentioned in this article. All information gathered is from the public domain.