Kevin White Turned 23 and No One Cares 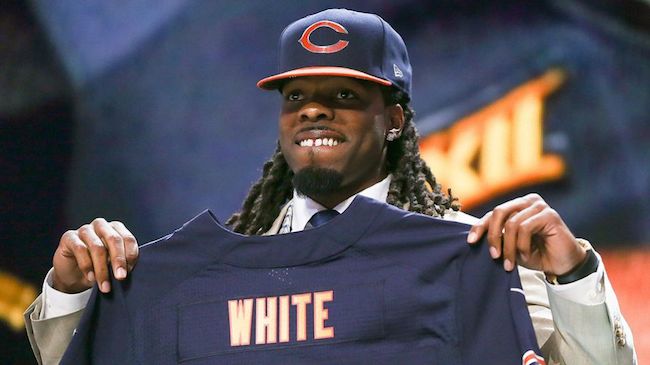 Kevin White is the NFL’s Benjamin Button.  Seemingly every year that goes by, he gets a year younger, and no one seems to care.  Though he was born on June 25, 1992, at some point over the last couple years, when the clock struck midnight, Kevin White’s birthdate changed to June 25, 1993.  Either Kevin White found a fairy godmother with the magical ability to change the space time continuum or an enchanted wireless mouse found its way into Kevin White’s Wikipedia page and changed his fate.

Somehow, some way, Kevin White‘s age has been misrepresented across sports media platforms.  White is 23-years old, a full two years older than his peers in the 2015 NFL Draft class: Devin Funchess and Amari Cooper.

Jon Moore from RotoViz was the first fantasy football detective to publicly insist that Kevin White was in fact born in 1992, not 1993, as is listed on his Wikipedia page.  White’s Wikipedia page references White’s official ChicagoBears.com profile page, which may have sourced its birthdate data from Wikipedia itself — the ultimate misinformation feedback loop.

Interestingly, a silent war has been recently smoldering on Kevin White‘s Wikipedia page as interested parties continuously flip White’s age back and forth with various citations.

Kevin White age on Wikipedia was corrected on August 15, 2015

Kevin White age on Wikipedia was switched back to 22-years old on August 16, 2015 and references White’s ChicagoBears.com profile page.

Like any crowdsourced endeavor, not all information on Wikipedia.org is accurate.  Unfortunately, that now includes Kevin White’s age.  Here is Jon Moore’s position:

@DamonHatheway yea but there’s an SI feature on him from last fall that says he was 22 at the time. And his apparent GF tweeted about him 23

Ben Glickman, who wrote an in-depth Kevin White profile for Sports Illustrated in November, 2014 that refers to a 22-year old Kevin White, agreed with Jon Moore’s contention that White’s birthdate is June 25, 1992.

@DamonHatheway Hey Damon, thanks for reaching out. Kevin is 23 now. Was born in June 1992.

Even Kevin White‘s longtime significant other, Roxy Gbor, has been attempting to correct Kevin White’s age via social media to no avail. Despite being the lone sports media outlet armed with the crucial information that Kevin White was a full two years older than 21-year old phenom Amari Cooper, Sports Illustrated surprisingly remained more bullish on Kevin White’s potential during the weeks leading up the NFL Draft.  The sports media stalwart still ranked the relatively ancient White as their No. 1 rookie wide receiver headed into the 2015 NFL Draft (Cooper was No. 2).  Puzzling.

On Thursday, April 30, 2015, the Chicago Bears selected Kevin White, one of the older wide receivers in the 2015 draft class, with the 7th overall pick.  Did the Chicago Bears think that they were selecting a precocious 21-year old as-listed by every major sports media platform?  As of August 22, 2015, the Chicago Bears official website lists White’s age as 22-years old, which suggests that, at the very least, the team’s personnel department is not synchronized with the media relations and marketing departments. Kevin White is not the only Benjamin Button player to get progressively younger with every passing year.  Cameron Artis-Payne is another former junior college player who transferred to a major conference university but retained the age of a former D1 underclassman through NFL Draft weekend.  Then, over the summer, Artis-Payne’s birthdate was suddenly updated to reflect the reality that he played multiple seasons at a lower level of competition before transferring to Auburn University.  Artis-Payne aged two years instantly.  Looking back in time on the Internet via WayBackMachine.org, we see that Cameron Artis-Payne’s birthdate was listed as June 23, 1992 as recently as May 20, 2015.

Cameron Artis-Payne’s documented date of birth on ESPN.com as of May 20, 2015

Unlike Kevin White, Cameron Artis-Payne‘s inaccurate birth date was recently corrected across major sports media platforms.  On ESPN.com, for example, Artis-Payne’s birth date is now listed as June 23, 1990.  Cameron Artis-Payne is older than Joseph Randle and only has one year left before he reaches the backside of the running back career age-based productivity curve.  Dynasty league enthusiasts take note.

Kevin White and Cameron Artis-Payne‘s true dates of birth have been established.  While Kevin White’s age on PlayerPlayer.com is accurate, most major sports media platforms continue to provide the public with an inaccurate date of birth.

1. Was Kevin White’s age falsification the result of an elaborate hoax intentionally perpetrated to enhance White’s reputation as “phenom” prospect or was it simply an innocent data error by an oblivious fan inaccurately updating White’s Wikipedia page?

2. Did the Chicago Bears know that Kevin White was 22-years old, as opposed to 21-years old, when the team drafted him with the 7th overall pick in the 2015 NFL Draft?

3. Even if the Bears did not know Kevin White’s true age on draft day, would the team have drafted him anyway?

4. Does Kevin White know that his age is currently being misrepresented across major sports media platforms?

5. Why has Cameron Artis-Payne‘s age been corrected across major sports media platforms, while Kevin White’s false age persists across these mediums?