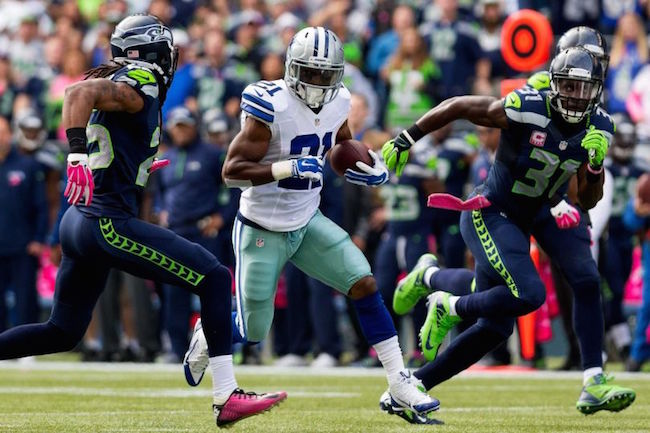 What’s that you say?  Trying to steal laughs with a shoplifting joke?  Joseph Randle’s career quickly went from promise to punchline and back again.  Primed to capitalize on a significant opportunity, drafters have failed to translate the promise into draft position.  With a 41.5 MyFantasyLeague.com money league ADP, Randle is about to be that hundred dollar bill you just found on the fantasy streets.

Joseph Randle is not all roses, but we see some signs of that aforementioned promise.  It starts with a 19.7 breakout age, placing him in the 69th-percentile and a sign of a quick study. In three years at Oklahoma State, Randle managed to finish each season above five yards per carry and had over 100 receptions for his college career, calming the concerns he is unable to be a three-down back.

Looking deeper into Joseph Randle’s PlayerProfiler page, we find a running back who has above average Burst Score (60th-percentile) and Agility Score (56th-percentile), the latter of which actually is better than predecessor DeMarco Murray (33rd-percentile).  This indicates a player who has the initial burst, along with the balance and short-area quickness, to take advantage of running lanes.  Fantasy experts by consensus seem to agree that Joseph Randle is a JAG (Just. A. Guy.), but Randle’s college resume and athletic measurements indicate that he is more talented than the seemingly universal JAG perception.

What worries me on Joe Randle is that beyond a 51-carry sample in ’14 there is little reason to believe he is or can be a quality NFL back.

Many point to the 3.0 yards per carry (on 51 carries) during Joseph Randle’s rookie year as a sign that he is unable to succeed in the Cowboys backfield.  However, adjustments during his sophomore season, as well as changes to the offensive line, caused that number to jump to 6.7 yards per carry (on 54 carries).  Another offseason that featured more offensive line upgrades (hi La’el Collins!) to a unit that was top-3 in every offensive line efficiency metric.  The Cowboys offensive line dominance combined with Dallas’ extraordinary surrounding skill players provides the perfect opportunity for a newly-minted starting running back to ascend.  Even a relatively inefficient running back in Randle’s situation would post low-end RB1, high-end RB2 numbers ala Lamar Miller and Mark Ingram in 2014.  If Joseph Randle assumes the every-down workhorse role he succeeded in at Oklahoma State, he could be a top-5 fantasy RB.  Yet, his 41.5 MFL ADP is round 4 — an excellent value.

Remember the Darren McFadden who was coming out of Arkansas, driving around in that purple and green custom Cadillac?  Well, one look at his PlayerProfiler page reminds you of the promise and sky high potential that afforded said Cadillac.

While the comparable is intriguing, we need to take into account one other feature of that PlayerProfiler page… the Medical History link. These are just the most recent injuries McFadden has suffered.  Notice a theme?  Four of the last five injuries impact the legs, which has taken its toll on McFadden’s formerly world class speed and agility.  When you take away the explosiveness of an elite athlete like McFadden, it is difficult to bet on anything beyond mediocrity.

My favorite quote of the offseason: “Anyone can run behind the Cowboys offensive line.”  Considering the offensive line features three former first round picks (all Pro Bowlers), a first round caliber rookie (Collins), and two other multi-year starters; there is little surprise that they are a top unit.  They had a large part in the Cowboys surpassing 2000 total rushing yards last season (4.6 yards per carry), which was second in the NFL.  Add in the fact that all five starters are returning with the oldest being just 31, and we have ourselves yet another reason to ride the Randle express to a fantasy championship.

While up on my soapbox for Randle, I like the late play for another Dallas running back: Lance Dunbar.  As always, we take a look at his PlayerProfiler.com page.

Here we have a player with a 40.6-percent College Dominator Rating, considered excellent for the position. Add in an almost-phenomenal 19.6 Breakout Age and you have a college player with the makings of a solid NFL running back.  Lance Dunbar‘s Agility Score of 10.94 is also off-the-charts (90th-percentile), giving him that unique trait that separates him from other running backs. Dunbar showed some of that agility with a 12.1 yards per reception in 2014 and with rumors yet again of an expanded role in the passing game, a MFL ADP of 183.9 is also well worth the risk.

An elite cast is a nice boon for any running back, but Joseph Randle has the burst and agility to make the most of every hole created by the offensive line.  Add in poor competition (McFadden) along with role players (Dunbar) who are not expected to be a workhorse, and Randle is capable of seizing the job and holding it for the duration of 2015.  It is not crazy to expect over 250 touches for the third year player and the upside to finish as a high-end RB1.  This is a cheap flag to plant with plenty of fertile ground for a fantasy profit.