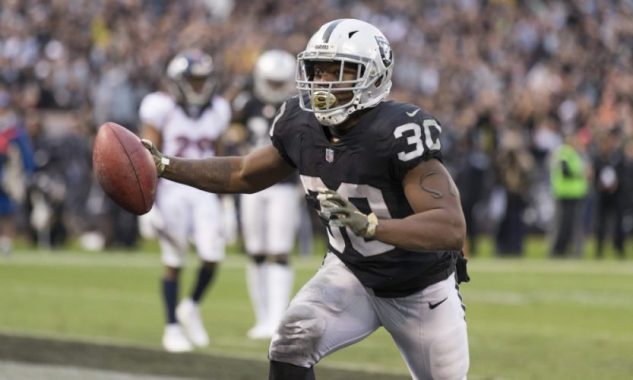 The NFL has had plenty of injuries and trades over the last few days.  This always opens up value in DFS on FanDuel for the following week, as they are unable to adjust prices to account for the opportunity lower-priced players will see.  These players are the perfect value targets for DFS players that are trying to afford the high-ticket running backs that win weeks.  Here are the best lineup makers that the advanced stats and metrics have identified.

With Marshawn Lynch landing on IR, the Raiders will have to rely on Doug Martin and Jalen Richard.  Martin is averaging 3.4 yards per touch to Richard’s 6.8.  Jon Gruden isn’t a rational coach, but it’s hard to ignore that difference. The biggest reason to play Richard is his dominance in the receiving game since his college days, evidenced by a 18.4-percent college target share (95th-percentile). This year, he has seen 37 targets, No. 9 among qualified running backs, and 31 receptions (No. 6) this season.

The Raiders will be playing from behind the sticks, which should increase Richard’s snaps.  The Colts have also given up 49 receptions to running backs, tied for second-most in the NFL.  Richard’s ideal matchup and increase in usage make him a perfect value play this week.

Despite seeing less than 50 percent of the Broncos backfield opportunities, Phillip Lindsay has been an RB2 or better in 5-6 full games.  His backfield companion Royce Freeman picked up a high ankle sprain in week 7 and will miss some time.  This paves the way for Lindsay to secure workhorse touches against the Chiefs in week 8.

Lindsay has already been hyper-efficient on his limited touches, as evidenced by his 5.3 True Yards Per Carry, 8th-best among RBs.  The Chiefs are ceding over 5.1 yards per carry and 29.2 FanDuel fantasy points per game.  Lindsay is a top-5 play and isn’t even priced in the top 12.

After Jermaine Kearse blew up in everyone’s face last week, Robby Anderson looks like the better play in week 8.  The Bears continue to struggle against explosive slot receivers with Julian Edelman posting a 5/36/1 stat line last week.  While Kearse is still the primary slot receiver for the Jets, Anderson runs out of the slot at a 20 percent rate.  He has yet to catch more than three balls in a game this season, so he shapes up as a risky tournament option.

Amari Cooper‘s trade to the Cowboys cleared the way for Martavis Bryant to step into a full-time role with the Raiders.  Bryant won’t take many of the slot routes that Cooper held, but he will secure a heftier target share.  Per data from TheQuantEdge, Bryant nearly doubles his target share when Cooper is off of the field. 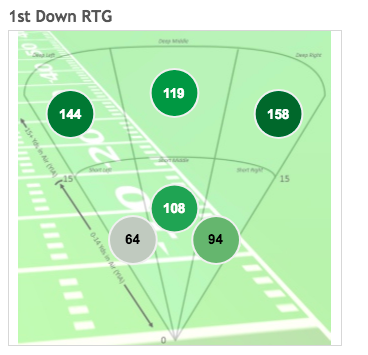 1st Down Passer Rating versus Colts Defense by location per SharpFootballStats.com

The Raiders are facing the Colts this week, who have been very weak against first down deep targets.  Offenses have completed 9/12 deep passes for 445 yards and three touchdowns to one pick.  Bryant has been a prototypical deep threat since his college days at Clemson when he averaged 19.7 yards per reception.  He has an average target distance of 14.4 yards this season, top-20 among receivers.  He will see an influx of targets and the Raiders will take advantage of the Colts secondary’s deep inefficiencies.

Slot receivers continue to shred the Jets every week.  Bears rookie WR Anthony Miller is next on that list, operating out of the slot on 71 percent of his snaps.  Miller set a season-high in routes (37) and targets (7) last week against the Patriots.  These numbers may grow if WR Allen Robinson misses time.  According to Rotoworld, Robinson may have aggravated his groin injury in week 7 and has yet to practice this week.

Miller will see Parry Nickerson in coverage, who is filling in for Buster Skrine.  Nickerson is a sixth-round rookie from Tulane who has been exploited in coverage thus far.  Even if Skrine passes concussion protocol, he has given up at least 16 fantasy points in every game that he has played more than 20 percent of the snaps.

After a disappointing week 5, Vance McDonald got back on track with seven receptions for 68 yards on eight targets in week 6.  The Browns continue to play their safeties 20 yards deep, giving opposing pass catchers plenty of room to maneuver after the catch.  McDonald is third among tight ends with 205 yards after the catch.

McDonald has been the most efficient pass catcher on the Steelers this season.  He has the best Target Premium on the team (+21.5%, sixth among tight ends) and a 125.7 passer rating (third among tight ends) when targeted.  He will be QB Ben Roethlisberger‘s safety valve to escape the Browns pass rush.