We’ve hit on a bold take in each of the past two weeks plus some half-hits sprinkled throughout. This week we’ll look to unearth some advanced data and analytics and hit multiple hot takes in Week 4. Let’s get to the scorchers.

Keenan Allen hitting 30 (DraftKings) points should not surprise anyone when it happens. Allen is first in nearly every volume metric including:

Through three weeks, Allen has averaged 29.2 fantasy points and he still has room to improve. That mark is still .5 points below expectation. Allen also has a phenomenal matchup against an NFL team that almost certainly doesn’t want to win football games. The Dolphins have allowed 30.6 DraftKings points per game to opposing wideouts this season. 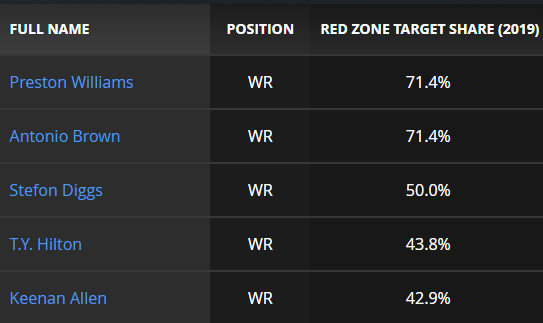 Finally, the Chargers are tied with the Chiefs as owners of the highest implied team total on the slate, 30.5 points. Allen is top-five in red zone target share. For any mean projection, 30 fantasy points is on the upper end of outcomes. However, it’s a more attainable total for Allen than any other player on the main slate. Despite that, Allen is only priced as the third receiver on DraftKings and Fanduel. DFS doesn’t have to be hard. Lock Keenan Allen and move on.

Daniel Jones is a Top-Five Quarterback

If Josh Allen was a good passer he’d probably look like Daniel Jones. At Duke University, Jones wasn’t an efficient passer. However, his small sample of NFL games greatly disputes that. In his first start in the league, Jones recorded 10.4 adjusted yards per attempt. Allen hasn’t hit that mark once in 19 games. Jones completed 85.3-percent of his passes during the preseason and averaged 12.2 yards per attempt.

His matchup versus Washingon is beyond tantalizing. They have allowed 271 passing yards per game and every quarterback who has faced them has thrown for three scores. As if on cue, Jones also put his rushing value on full display in his first start with a 4-28-2 line. With multiple avenues to paying off and the upside of being good at passing, a top-five performance is well within Jones’ range of outcomes.

No game is more ripe for stacking than the showdown than Arizona’s matchup with the Seattle Seahawks. The game opened with a 47-point total and has gone up a point since then. This line movement is primarily a product of the pace these two teams play at plus their horrid defenses.

The Cardinals have run the third-most plays of all teams and Seattle is sitting at tenth. Arizona has allowed 29.3 points per game (29th) and Seattle has given up 26.3 (25th).

This game sets up for both teams to take turns scoring like a game of bad-defense HORSE. David Johnson has dominated the work in Arizona. He’s played on 85-percent of the team’s snaps and has an 84.1-percent opportunity share. Both metrics are top-five among all backs.

Johnson is going to control all of the running back work in the fastest-pace game on Sunday. 150 yards is an arbitrary mark to hit but Johnson could feasibly get there. If he does, Johnson will be a tournament-winner for the first time in 2019.