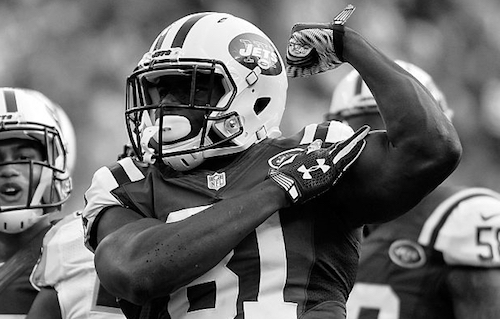 It seems obvious that the most successful football players will usually be relatively athletic. While being the most athletic player on the field does not guarantee success, it certainly improves the odds that a player will be successful.

The PlayerProfiler Terms Glossary outlines two ways to evaluate how athletic a player is. The first, SPARQx – an approximation of Nike’s SPARQ (Speed, Power, Agility, Reaction and Quickness) rating, is a standardized test for athleticism. SPARQ input factors are 40-yard dash, vertical jump, 20-yard shuttle, and the power ball throw. Because Nikeʼs SPARQ formula is not public, we compared publicly available SPARQ scores to their related input factors, reverse-engineered an approximation of the SPARQ formula, and then applied the formula to each playerʼs workout metrics. For calculation purposes, power ball throw was converted into bench press so all input factors align with NFL Scouting Combine events.

The second method of evaluating athleticism is the Athleticism Score, which summarizes a player’s workout metrics and normalizes for size. It is derived by aggregating each player’s 40-yard dash, Burst Score, and Agility Score, and then factoring in a relevant measure of player size to ensure that big players receive a premium for speed, quickness and explosiveness. Running backs are afforded a BMI premium, while WRs and TEs are allotted a height and weight premium.

While athleticism is not the be all end all when looking at a player on his own, it can be a very useful tool when it points to an archetype the player falls into. Quincy Enunwa‘s athleticism places him in a prototypical superstar lineage of receivers, so does he measure up to those who he compares to?

When viewing Quincy Enunwa‘s profile, the first thing that stands out is his best comparable, who is Josh Gordon. Before you go yelling how blasphemous this is, I urge you to take a step back, and understand why this comparison makes sense. Enunwa, like Gordon, is a big bodied wide receiver. Both weigh 225 pounds, while Enunwa stands 6 foot 2 inches tall, Gordon is only one inch taller.

Furthermore, when looking through this archetype, other receivers in this category include superstars Allen Robinson and Dez Bryant. And now that I have spewed all possible blasphemy, you might as well quit reading this unless you would like to become a Quincy Enunwa truther (get on the bandwagon folks). Both Robinson and Bryant, like Enunwa, are 6 foot 2 inches tall, and both weigh only five pounds less than him. Being a big bodied receiver definitely provides great upside as three superstars are derived right from this mold. Could Enunwa become the fourth?

Digging deeper into athleticism, where Quincy Enunwa has the fastest, 4.45 (78th-percentile) 40-Yard Dash, and most impressive, 116.3 (96th-percentile) Height-adjusted Speed Score of the group, we can see why it is right to compare Enunwa to the aforementioned bunch of superstars. Unfortunately, due to combine injuries, we have an incomplete SPARQ-x Score.

Enunwa, You Are Clear For Take Off

Although Quincy Enunwa is playing alongside the historically amazing, Brandon Marshall, and fellow great receiver, Eric Decker, who played his best football just last year, he is producing well in his third receiver role.

Now is the time to get Quincy Enunwa on all of your dynasty rosters before his price surges any higher, as it rightfully should. Additionally, his production is here to stay for this season, so prepare to use him in your redraft leagues as well.