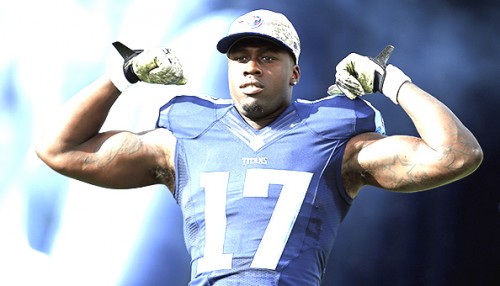 Dorial Green-Beckham was drafted 40th overall (2.08) by the Tennessee Titans in the 2015 NFL draft.  On Tuesday August 16th 2016, Green-Beckham was traded to the Philadelphia Eagles in return for offensive lineman Dennis Kelly.

How does this Dorial Green-Beckham trade impact the fantasy outlook of Rishard Matthews, Kendall Wright, Tajae Sharpe, and Tre McBride?

Dorial Green-Beckham enthusiasts were likely happy to see DGB rescued from his 2nd string banishment on a run-first Titans offense?  Meanwhile, the trade confirmed the beliefs of Green-Beckham detractors who viewed DBG as a collegiate underachiever who lacked the necessary passion to translate his athletic gifts into high-end fantasy production. Despite an end-of-season production bump, I refused to target the enigmatic Dorial Green-Beckham during the offseason.  While Green-Beckham led all wide receivers in contested catch rate in 2015, he mysteriously closed out the season with a Ginn-esque 47.8-percent overall catch rate.  Brian Malone’s “Is It Time To Panic Trade Dorial Green-Beckham?” spoke to my concerns.  Unable to fully understand the mechanics behind Green-Beckham’s efficiency metrics, I abstained from targeting DBG out of fear that he would ultimately be regarded as a lifelong project who never put it all together.

Rishard Matthews was arguably the most efficient wide receiver in football in 2015 evidenced by a 38.0 (No. 3) Production Premium, +41.5-percent (No. 3) Target Premium, and a 10.9 (No. 1) Yards Per Target with the Dolphins last season.  Matthews offers the safest floor this year out of all the Titan’s receivers.  If you had not acquired Matthews before today’s announcement, there is still time to acquire a player without significant brand recognition or offseason buzz.

Rishard Matthews was the most efficient full-time wide receiver in the NFL last season.https://t.co/vkL2lRYuo6 pic.twitter.com/faJ0r5KjDz

With DGB struggling, Rishard Matthews may emerge as the top fantasy WR in TEN. He was on pace for 1,000 yards before a rib injury last year.

Tajae Sharpe was a precocious college producer evidenced by a 37.8-percent (72nd-percentile) College Dominator Rating and an 18.7 (94th-percentile) Breakout Age.  Scouts also lauded Sharpe’s route running and hands coming out of the University of Massachusetts.  Sharpe recorded a mere three drops during his entire college career.

Working against Tajae Sharpe, is his slight frame.  At 6-2, 194-pounds, players with his profile lack successful NFL comparables.  Svelte, low BMI receivers often excel in an NFL practice setting only to be snuffed out by press coverage on Sunday afternoons.

The only wide receiver with an NFL No. 1 wide receiver season on his resume is Kendall Wright.  During that target-laden 2013 season, Wright posted 90-plus receptions and 1000-plus yards.  While Wright and Green-Beckham played vastly different roles in 2015, according to the Law of the Conservation of Targets, Dorial Green-Beckham‘s departure will create nominal targets for Wright in 2016.  Who would be surprised if Kendall Wright led the Titans in Target Share in a high volume slot role this season?

With the Dorial Green-Beckham distraction eliminated, Rishard Matthews, Kendall Wright, Tajae Sharpe, and perhaps even Tre McBride find themselves in position to become “the guy” in Tennessee.  It’s not everyday you can acquire a potential No. 1 WR tethered to young, ascending quarterback of Marcus Mariota‘s ilk.