The first week of XFL football revealed heaps about the league’s future and the DFS landscape. It was also legitimately good professional football. DraftKings pricing became sharper but still left juice to be squeezed for value. Let’s look at the Week 1 trends and see how they, along with the advanced stats and metrics, can make us sharper DFS players for the upcoming weekend of XFL football.

As expected, XFL teams opted to pass significantly more often than their NFL counterparts. In 2019, NFL teams passed on 57.2-percent of their plays. XFL teams passed on 61-percent of their Week 1 plays. Dallas and Houston passed on roughly three of every four plays called, while DC and St. Louis were the only two teams to pass anywhere near half the time (49.0 and 59.7-percent respectively, factoring out kneels). All other teams ran more balanced approaches.

Combined with the lack of backfield-dominating rushers, this led to many wide receivers reaching fantasy relevance while backs struggled to keep up. There were 13 receivers to hit double-digit DraftKings points but only three running backs reached that mark. All three backs scored at least 8.9 points via the air. Pass-catching backs, even those who have little to no value in the rushing game, may be the key to winning tournaments and cash games alike.

The Haves and the Have Nots at Quarterback

One place where the XFL fell in line with the big league was quarterback play setting the tone for each team. LA and Dallas were forced to turn to their backups due to injuries to Josh Johnson ($10,400) and Landry Jones ($9,400). Unsurprisingly, this led to their teams averaging 3.9 and 4.5 yards per play. Those marks were the two worst in the league. Both injured passers were limited participants in practice on Wednesday and would be cash viable if they suit up. The two will face off on Sunday and both play for teams that want to push the limits of pass-heavy offenses.

Aaron Murray was able to move the football but crushed his team when they needed him most. He was sacked three times and threw two picks. Many of those mistakes came in the red zone or on crucial third downs. He’s out with an injury this week, making USF’s dual-threat passer Quinton Flowers ($7,500) a great tournament option.

The XFL has done a tremendous job at obscuring stats with slow responses on access and only posting fragments of them in individual box scores. Here are the top-10 players by Target Share with an attempt to remove throwaways since they don’t have an intended target. Following that will be the rush attempt share data. 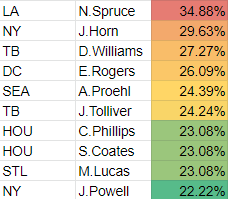 –Joe Horn ($3,400) only caught two of his eight targets, but we chase volume here and he’s a screaming value on DraftKings.

-Tampa Bay, Houston and New York all landed two players in the Top-10 and should be the easiest teams to stack.

–Marcus Lucas is the only tight end to appear in the top-10, so keep fading the position until further notice. 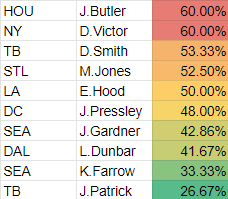 –Darius Victor ($4,100) and James Butler ($6,300) have a major leg up on the competition but each carried the ball only nine times in Week 1. Victor did catch three balls, and New York ran the fewest plays, so he will still have some upside when the Guardians play in more competitive games.

–Jhurrell Pressley may fall in the sweet spot of rushes and receptions, recording 12 Week 1 carries while seeing three targets in an uncompetitive game versus Seattle.

The comical values that popped up in the XFL’s first week are no longer present. Both DraftKings and Fanduel got a grip on pricing, but there’s still enough cheap plays to get to Phillip Walker ($10,600). Houston decimated the LA Wildcats in their first game and still passed the ball more than 70-percent of the time. Walker took more deep shots than any other passer and found paydirt on numerous occasions. Cam Phillips ($8,400) and Kahlil Lewis ($8,900) both have 90th-percentile Breakout Ages earned at FBS schools. Sammie Coates ($9,500) nearly broke the SPARQ-x score as we know it.

This offense is the XFL’s version of Jameis Winston and the Bucs. Walker will be chalky but he’s worth paying for in cash, and there are many ways to make lineups that feature him unique for tournaments.

Walker and the Roughnecks face off versus the St. Louis Battlehawks this week, the latter coming off an impressive upset over Dallas. They managed to pull off the victory on the back of former Ole Miss passer Jordan Ta’amu‘s ($8,900) dynamic gameplay. Ta’amu rushed for 77 yards on nine attempts. He’s the third-leading rusher in the league through one week.

Jordan Ta'amu got it done on the ground and in the air pic.twitter.com/XOgxxEjlcF

If Houston is able to keep up their scoring versus St. Louis, Ta’amu will get to play in a higher tempo game and unleash his full potential.

Because Matt Jones, De’Veon Smith and Elijah Hood will get the bulk of the rushing work but have yet to show any involvement in the receiving game, it’s another great week to fade all the expensive ball carriers.

Nick Holley ($4,800) played quarterback, running back and wide receiver at Kent State. He was initially acquired via the draft by Houston as a running back but has since transitioned to receiver. He caught four balls on Saturday and played on two-thirds of the offensive snaps. For the #ZeroRB believers, DraftKings has him listed at running back and he gets decent run on the league’s best passing offense. The variance inherent in a handful of targets keeps him off the table in cash games, but he does make a great tournament stacking option with Walker.

Darius Victor is the best way to save at a fluky position without punting entirely. The Guardians never relinquished control of their game versus Tampa Bay and wound up running 44 total plays, seven fewer than the next-lowest team. This week New York faces DC, an early favorite to win the league, which should force them to crank up the pace. Among the only runners seeing work in all phases, Victor is the best value back.

In tournaments, stacking the top receiving options with their quarterback is a necessity, with double and triple stacks being firmly in play: If a lineup has Phillip Walker, it should also have two of Cam Phillips, Sammie Coates, Kahlil Lewis, Nick Holley or even Ryan Malone ($3,900), who also saw four targets on Saturday. Play the receivers getting volume on the team with their quarterback.

The final flex spot can be dedicated to locking up maximum volume for a reasonable price:

–Dan Williams is second in the XFL with a 27.3-percent Target Share and may be getting a quarterback upgrade if Aaron Murray can’t go

-Williams’ teammate, Jalen Tolliver (24.2-percent), is in the same boat but costs a fraction of the price

–Joe Horn only reeled in two of his eight targets but that volume represented the second-highest target share in the league at 29.6-percent. His $3,400 price tag is a crime

-Battlehawks passer Jordan Ta’amu took four deep shots, all in the first half, and half went to Alonzo Russell ($4,800). If the Battlehawks don’t play another ugly game, they should be forced into taking more risks throughout the second half. Because of Ta’amu’s legs, he’s a passer that can comfortably be stacked with a lone receiver on his team

Houston’s defense ($3,400) snuffed out LA drives quickly and gave the ball back to their offense within three plays on multiple occasions. Due to touchback rules, punts tend to give the other team great starting field position and a much higher chance of scoring. Stacking whole offenses with that team’s defense might be a viable strategy in the XFL since defensive success will highly correlate with success on the other side of the ball.

The Roughnecks defense generated five sacks, two interceptions and a forced fumble. They are among the better standalone plays, and using them makes for an interesting game-theory move when running them back with Phillip Walker and his receivers.